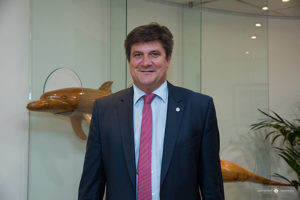 George Xiradakis born in Athens, Greece in 1964, he is married with two adult children. In 1984 he graduated from Aspropyrgos Nautical Marine Academy in Greece and worked as a Deck Officer onboard dry cargo ships until 1987. After completing his military service in the Greek Navy as Commander of a Landing Ship in 1989, he joined the City of London Polytechnic, where he was awarded the Diploma in Commercial Shipping Operations.  He holds an MSc in Maritime Studies from the University of Wales-Cardiff, awarded in 1991 and he has successfully completed the Investment and Risk Management Program in M.I.T. He is fluent in English and French.

In January 1999, he founded XRTC Business Consultants Ltd becoming the Exclusive Commercial Representative of Credit Lyonnais Group in Greece until 2004. Between 2005 and 2008, XRTC acted as an Exclusive Commercial Representative for Natixis Bank.  Soon after, XRTC expanded its scope as Financial and Advisor Consultant for Greek Shipping, offering its services to national and International Institutions and Organizations.

In 2009, he started working closely with the Chinese shipping finance market.  In 2010 he was appointed as Maritime Financial Expert of China Development Bank.  In 2010 his company received the Lloyd’s List Greek Shipping Awards as “Financier of the Year 2010” for the completion of the first bilateral loan between a Chinese bank and a Greek shipowner.

George Xiradakis has built up a 40-year extensive experience in the maritime industry serving in different positions of public and private organizations. Among the positions he has served in the private sector, are as a Board Member of the following listed companies:

In addition, during the last decade, he has been appointed by numerous European financial institutions, in dealing with NPL transactions, providing structured solutions and investment opportunities in the maritime and real estate industry.

In the public sector, George Xiradakis served as Chairman and CEO of the Board of Directors of the Hellenic Public Real Estate Corporation – KED (2004-2006) and President of the National Center of Port Development (2006-2007). Today he serves as Senior Advisor to the Piraeus Chamber of Commerce & Industry on Maritime related matters.

His tenure in the Hellenic Public Real Estate Corporation – KED was characterized by innovative proposals such as the implementation of projects through Public & Private Sector Partnerships (PPPs), the asset-backed securitization and the company’s extroversion in order to attract the interest of international real estate investors.

Driven by his advanced social intelligence skills, George Xiradakis is very active in business networking, serving the Piraeus Maritime Cluster via several positions such as:

Maritime industry has been George Xiradakis passion which has been expressed through his vision on the merits of the «Blue Economy» in creating a sustainable future for Europe and the world. This vision attracted the Greek Prime Minister’s attention and secured his candidacy as a Member of European Parliament in the 2019 EU elections.

He is a frequent keynote speaker in national and international conferences dealing with a range of subjects and he is often invited by academic institutions as a maritime thought leader. He also has a strong presence in the press via articles or interviews and he is recipient of several awards, among the many being, the Meritorious Public Service Award from the US Department of Homeland Security / US Coast Guard.